John Foster’s store was originally located on the corner of Mary and Calton Hill at Fiveways before later relocating to middle Mary Street. The shop had a range of stock, a bit of everything like a lot of stores of the time but John specialised as an ironmonger, engineer and machinist as was described as amongst the “inventive talent” of the Gympie district.

John Foster was one of Gympie’s oldest identities. He was born at Bethnal Green, London and left England with his parents at the age of six, around 1961. They arrived and lived in South Brisbane, but in 1868, around when John was 14 years old, the family moved to Lake Cootharaba and John was employed at McGhie, Luya Sawmill. He then later worked as sub-manager at the Tewantin sawmill before the family again moved to Gympie, where his parents settled on a farm on Cootharaba Road. John worked in building and contracting in Gympie, also finding employment in mining with engine-driving after receiving a Government certificate as well as later bench work at the Union Sawmills.

In his late 30’s, in 1891 he founded his business in Mary Street, carried under the name of John Foster and Son and Fosters Pty. Ltd.

The Gympie Times of 1 July 1899 reports of John Foster, “he acquired a good general knowledge at Cootharaba, a place so isolated that when he wanted to manufacture or repair an article he had to make the tools to be used in the performance. This is a sure test of ingenuity”. “He has invented several excellent little contrivances, as well as the machinery for the Russell belt, the non-success of the latter of which did not in any way reflect on the excellence of his machinery”.

In 1902, alterations to the shop were described as:

Second location of the store. Corner of Mary Street and Calton Hill.
This store located here circa 1913-1922

He was also musical being connected with the Gympie Musical Union, the Gympie Orchestral Society, the Gympie Amateur Minstrels and the Gympie Town Band. Also he was an alderman of Gympie for many years. He had five sons and two daughters with his wife Florence Mary Robinson before passing in 1937 at 83 years of age. 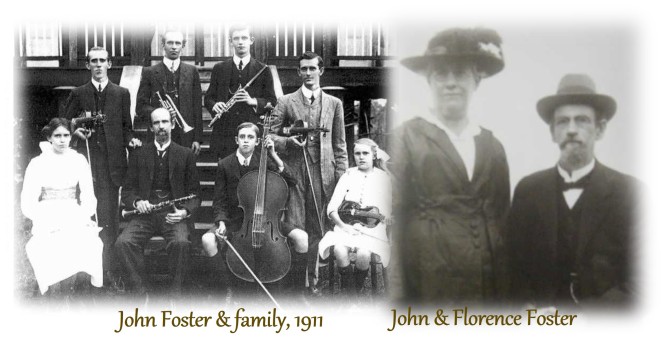