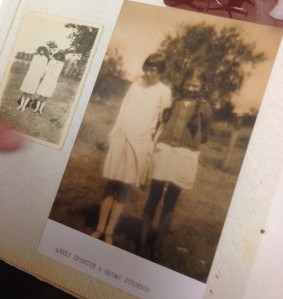 My mother’s name was Sarah Bassett nee Johnson. When my Mother’s mother and father were in hospital in the year 1929, she lived with her mother’s cousins Mr. and Mrs. Edward and Agnes Wakeham. They lived at Traveston Homestead.

They had four adult children who at that time were single and also who was married. The four that were there with my mother were Agnes, Isabel, Ted and Harry. She was with them for about six months.

My mother was eleven at the time. She would get up at 4:30 in the morning to help them milk cows. When they had finished the milking she would then have to go to school. She went to Greenridge School which was within walking distance from the homestead. On arriving home she would have to change out of her school clothes and go back to milking the cows. They would take cream to the Traveston railway station three times a week.

Her mother and father died that year only two weeks apart from each other.