The Tozer Park Road Cemetery site was Gympie’s second cemetery, the first being the “King Street Cemetery” located on the corner of King and Alfred Streets, Gympie (read our blog on the King Street cemetery here)

Mr John Priddy was appointed as Gympie’s first sexton for the cemetery, having won the position from forty applicants on 1 December 1869. The cemetery had been planned a year earlier with the Department of Public Lands advertising on 2 December 1868 that 20 acres of land were to be set aside for the new cemetery:

Burials had taken place prior to John Priddy’s appointment as sexton however there was no burial records or register prior to his appointment. The subsequent first burial recorded was that of two month old, William Henry Cronin, who was buried on 5 December 1869.

Neil Priddy (ancestor of John Priddy) produced a research booklet “A History of the Gympie Cemeteries”, circa 1996) and states that “using death certificates as a guide, the first known person to be buried (at the Tozer Park Road Cemetery), appears to be 19 day old Isabella Jones, buried 31 December 1868″.

All burial charges had to be paid upfront to the Secretary of the Cemetery Trust and the receipt shown to John Priddy, before any graves could be dug.

What happened in the demise of the Tozer Street Cemetery?

Around 1873, complaints began about the unsuitability of the location. This went on for quite a period of time and many reasons and complaints were garnered:

By the end of 1884, a new location was suggested to be found for the cemetery.

In August 1886, the trustees were considering selling off the top frontage of the cemetery to the Railway Department. Resident Henry Joseph wrote to the Gympie Times, irate at this idea:

The Tozer Park burial ground was formally closed on 1 November 1886. The last burial being Edith Alice Rosevear who was interred on 29 October 1886. Those who wished to have their relatives remains exhumed and transferred to the new cemetery were later given permission to do so. However, many headstones remained for decades, left to the elements to deteriorate, and the grounds became derelict.

The area has changed over time and it began in 1889 with a Municipal Council meeting on 21 August 1889 when Alderman Mathews proposed a road resumption of the road running between the freeholds and the old cemetery – for it would come it handy for residential area. This was a road called ‘Black Street’:

The matters surrounding Black Street went on well into the second half of 1890 with Alderman Mathews proposing that the street should be closed as it was ‘positively dangerous to remain as it was”. He moved that the council should take steps to have it closed, and that the Works Committee should fence off the lower portion to prevent accidents.

Residents were not impressed with the inaction over Black Street with Mr A Hutchinson writing to The Gympie Times that the street is the “shortest and most direct line to the One Mile, bounded by the cemetery on one side and freehold and property holders on the other” and frustratingly wrote that “a certain person has, without law or leave, taken possession of this street and built a house upon it”. He outlines that the street is used by those who were pushed for time to catch the train. Read more:

Neil Priddy’s research “A History of the Gympie Cemeteries”, circa 1996) outlines the long case of Black Street. In a nutshell, most of Black Street was eventually closed. The road used to come out where the carpark is on Tozer Street beside the Sauers building (When using Google maps, if you zoom in on the area, ‘Black Street’ is still marked).

The former Tozer Park Cemetery land was handed over to the City of Gympie from the Hon. A. R Fletcher, MLA, Minster for Lands on 7 October 1967 during Gympie’s Centenary year. 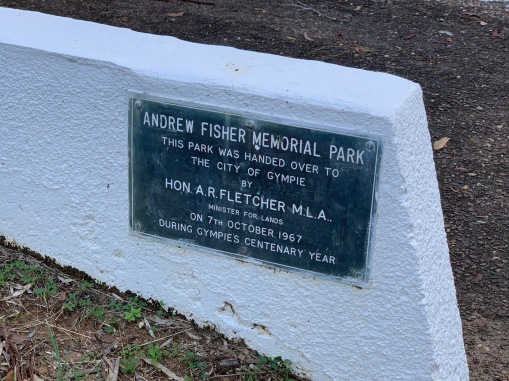 From 1969 part of the cemetery and surrounds was turned into housing and residential area and a portion became the Andrew Fisher Memorial Park.

In 1986, 63 of the remaining original headstones were moved to the new Gympie Cemetery at Two Mile, Corella Road by the Gympie National Trust and are signposted in the current Gympie Cemetery as “Pioneer Headstones 1869 – 1886”. None of these burials were exhumed or moved – just the headstones. It is unknown what became of the remaining 1000+ markers (it is said there were approx 1729 interments of the Tozer Park Road Cemetery), although some may have been used as fill on the site.

Still interested in the Tozer Park Cemetery? Read below about the fencing issues in 1868 of the new Cemetery (before John Priddy became Sexton of the Cemetery)….